Regardless of the technology you employ, acquiring aerial photographs for Melown Photogrammetry requires planning. The better the dataset, the better result you get. Conversely, datasets covering the same area can differ vastly in terms of processing cost.

This guide explains how to shoot a good and cost-effective dataset for true 3D mapping. If you have done photomapping surveys before you might want to go straight to our flight calculator.

What are the requirements on input datasets?

The input for Melown Photogrammetry consists of the following data:

The following is an overview of things that affect the flight plan.

Camera resolution is the size of the image taken by the camera, in pixels. Higher resolution leads to more detailed 3D models and may also allow flying in higher altitudes.

The angular extent of the scene captured by the camera is called the field of view (FOV). The field of view affects the number of images that need to be taken, the directionality of the data (see below) and the ground sampling distance. 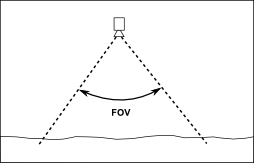 The ground sampling distance (GSD) is the distance between adjacent camera pixels measured at ground level. A dataset is said to have 10 cm GSD if the image pixels are, in reality, 10 cm apart on the ground. GSD is often called “ground resolution” by the general public.

The 3D mapping algorithm needs to see each point in multiple images to create a 3D model. The images thus need to overlap. Higher overlap means higher certainty and accuracy of the computed geometry.

Assuming that the images are taken in a regular grid, there are two kinds of overlap. Overlap in the direction of flight is called forward overlap (or route overlap). Overlap between neighboring rows of the grid is called sidelap (or transverse overlap). 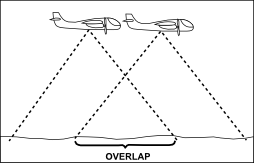 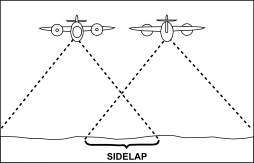 A dataset for true 3D mapping needs to have significant forward overlap as well as sidelap. Both are quantified as percentage of image width or height.

In surveys intended for DSM or orthophoto mapping it is sufficient to capture level surfaces such as roofs of buildings. However, true 3D models can be viewed from any angle so it is important to capture virtually all visible surfaces, including walls and facades. Any object in the area of interest should be photographed from the top and at least four other directions, multiple times. 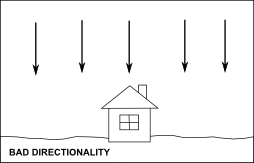 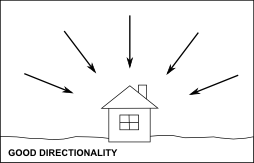 The directionality of the dataset can be improved by increasing camera FOV or by including oblique images.

There are two types of aerial photographs:

However, the offset from nadir for oblique images should not be excessive. Areas that are too far from the camera are useless for computation and there is no point in including the horizon in the images.

Oblique images, if present, typically exist in all four directions around each vertical image. Each such group can then be thought to form an output of a virtual camera with a higher FOV. We call this extended field of view the “virtual FOV”.

For vertical only datasets the virtual FOV is the same as the real camera FOV.

The camera can be mounted so that the top side of the image is facing forward or sideways. The former approach is more economical as it allows sparser flight lines at equal sidelap.

There are two basic requirements on datasets intended for true 3D mapping:

Many aerial surveys to date have not been planned with true 3D in mind. Lesser requirements exist to produce digital surface models (DSMs) or orthoimagery:

Melown Photogrammetry creates a preliminary quality report after initial processing of a dataset. The report contains visualizations of overlap and directionality and can be used to check which parts of the dataset satisfy requirements for true 3D mapping.

An example quality report is provided on this website.

If the reconstruction is supposed to serve for metric measurements or if it needs to align precisely with other geographic data, ground control points are required.

A ground control point (GCP) is a point that can be accurately identified in the images and whose precise geographic position is known, including the altitude. These can be corners of buildings and sidewalks or any other feature whose pixel position is easily measured and whose real world position is known from an external source.

Once you identify the GCPs, just create a simple text file with one GCP per line. Each line will contain the filename of the image, the pixel position of the feature (may be fractional), the geographic position in the target coordinate system (e.g. UTM) and the MSL altitude.

Here is an example of a GCP file:

The GCP file is optional.

The following are important parameters that are required in addition to all above: